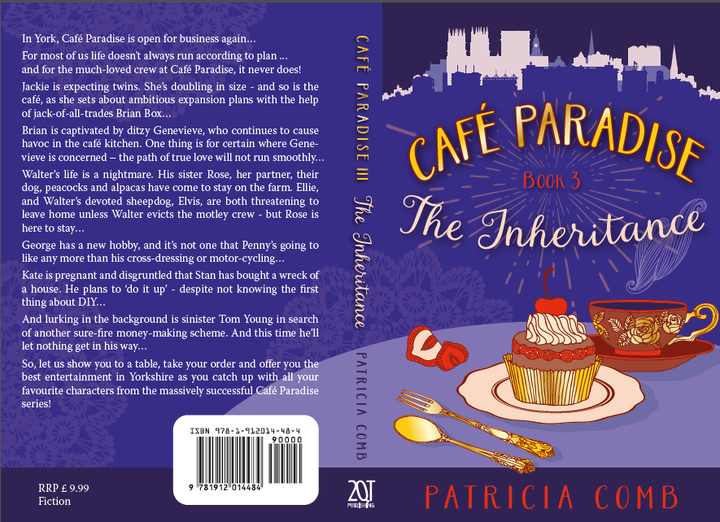 As Walter approached the house he saw Rose Breckenridge pacing impatiently around the farmyard. Mentally bracing himself he called out.

‘Now then Rose, what’s to do?’
​
‘My, you took your time our Walter. You’ve seen Ellie haven’t you? Then you know what’s to do. The Pension Company that owns the land we rent sent in the bailiffs and turfed us off the Holding this morning.. I need somewhere quick for my alpacas and my birds, so where else would I go, but to my nearest and dearest in my time of dire need, knowing he would help me out?’

Walter winced. Rose always had swung a good line in emotional blackmail. They had never been ‘nearest and dearest’  even as children. ‘You can’t stop here, Rose. I haven’t got the room. I’ve only just got enough space for my​ animals, where would I put yours? And what about that vanload of furniture Ellie says you’ve brought?’
‘You do fuss on Walter,’ Rose said wonderingly. ‘It’s simple. I’ve had a look around and the furniture can be stored in that barn over there and you’ve a couple of lovely fields for my alpacas and my hens can knock about with your lot. And the peacocks please themselves anyway. It’s not a problem, is it?’ She beamed at him and turned to Arthur waiting patiently behind her. ‘Hop in, Arthur and we’ll offload our girls and boys into that field down there. We need to get them settled before nightfall. Mind out, Walter we need quite a bit of space to turn this van about. Thanks a lot for having us. I knew you wouldn’t fail.’
She jumped up into the van beside Arthur and called down to Walter.

‘I hope Ellie’s got something nice for supper. We’re starving.’
​
Walter watched them bump down the track, the big van swaying dangerously under its heavy load.  Alpacas in his best hayfield all winter, churning up the ground and eating the grass down to its roots. He had plans to convert the barn to expand Ellie’s jam and chutney business and planned a small veg box enterprise. Now Rose wanted it as a furniture warehouse.
Someone please tell him he was having a bad dream and he would wake up in a moment and find Ellie snuggled up beside him in bed and all would be right with the world.
**********
‘I’m meeting with the man next door.’ Jackie smiled up at him.
​
Meeting with the man next door … was he missing something here? ‘About?’

‘About buying the property.’

‘Excuse me?’
Jackie flushed again. ‘Yes, I know you don’t know anything about it and I was going to tell you all about it when I got home tonight. I didn’t know you were coming in here early before I’d got anything to tell you at all and I still haven’t, but I might have later.’
Talk about losing the plot. Barney hung on grimly to Jackie’s original statement. ‘Buying the property next door? Since when?’
​
‘Since this morning,’ she said serenely.
​**********
She stopped her pacing of the office floor. ‘I am buying next door and doubling the size of the cafe. On Fridays and Saturdays we will be offering an evening restaurant menu and yes, I hope shortly to be having twins and managing them and the new project. And, I hope, my family will support me in this, ‘cos it’s going to happen.’
Scooping up a couple of biscuits from the plate, Walter rose to leave. ‘Do you remember building them playing card towers with me when you were a kid?’

Jackie gave him a guarded smile. ‘Yes, I do, happy times.’
​
‘Not when the bloody lot comes tumbling down, lass. There were tears before bedtime then and I doubt there’ll be a few more yet afore we’re through.’
He swiftly made for the door before an empty coffee cup could be thrown his way. ‘And you’ll have double the trouble with twins. I hope it is just twins. Did I ever tell you my Auntie Jane had triplets. You never know…’’ Walter slammed the door behind him and heard the cup smash against it on the other side.
**********
‘I bet you thought  I’d forgotten our anniversary, but I haven’t.’ George sounded triumphant. ‘Get the bags out, we’re off on a mystery tour tomorrow.’
‘A mystery tour?’ Penny echoed. ‘How do I know what to pack if I don’t know where I’m going? You’d better tell me.’
‘Not a word,’ George said firmly, ‘It’s an anniversary surprise. All I will say is, take some warm clothes, aye and your warmest coat and furry boots. See you tonight.’
**********
‘Shut your eyes,’ George commanded, ‘I want to keep the surprise until the very last moment.’
Penny could hardly contain herself. What had he bought? A yacht?

Holding on tightly to George, Penny obediently closed her eyes and warily made her way forward along the quay. George came to an abrupt halt.
‘You can open your eyes now, Penny love. Ta da. What do you think to that?’
**********
Outside they explored the large overgrown garden and found a lovely old summer house almost hidden by ivy.
​
‘It’s like that film The Secret Garden out here,’ said Stan gazing at what had once been herbaceous borders, now grown wild and filled with weed. I bet it’s a real haven for wildlife. I’d like to keep that going, you know, log piles for the hedgehogs and bee-boxes, that kind of thing.  It would be a fantastic garden for kids.’
Julie looked at him speculatively. ‘Are you really interested in the property then, Mr Peterson?’

‘One hundred percent. I told Mrs Simpson didn’t I, sort of?’

‘I certainly got that impression, I just wanted to make sure. Of course, you’ll need a second viewing with you wife.’
​
‘She’ll love it as much as I do,’ Stan said confidently. ‘I’ll bring her as soon as I can. I’ll let you know tomorrow.’
Stan drove home in buoyant mood. He couldn’t wait to tell Kate about Beech Cottage and to take her there. Their dream home at last.

**********
‘You told her what? That we’d have it and I haven’t even seen it yet. Stan, you promised.  ‘You’ll always have the last word … looking costs nothing.’ Kate repeated Stan’s words back to him.
Kate glared at the computer  screen. ‘This place will cost us the shirts off our backs if the pictures here are anything to go by. Look at the windows; the gutterings and downpipes are hanging off, not to mention the state of the front door. The wood is so rotten you can see daylight through the planks. ‘And you told her we’d have it?’ She shook her head in disbelief.